Ester was a 2001 addition to our mare band. I really love her breeding. Her versatile sire, Eiger I, was Hannoverian Stallion of the Year 1999, and is recognized for passing on superior jumping talent, good gaits, steady temperament and rideability. His illustrious offspring include Esprit FRH, Elute, and Hanoverian Stallion of 1995, Espri. Ester’s damsire, Wenzel I, won his 100 day test in 1979, was judged Best Stallion in his Age Group in 1980, and has sired 33 licensed sons and 68 states premium daughters. His performance offspring include Walk on Top and Wild Card.
Ester is liver chestnut with a blaze and four stockings, good uphill conformation, a beautifully arched neck, and excellent interior qualities of gentleness and calm. She moves well, with nicely animated trot and canter, which she passes on to her offspring.
In 2002 Ester was bred to Contendro, the fabulous, versatile Contender son who was the acclaimed champion of his Performance Test in 2000, with a score of 145. Known to pass on his exceptional type, and his elastic gaits,  he proved to be a great match for Ester, producing the elegant, exceptional moving filly Contessa on March 31, 2003.
In 2004 we bred Ester to Fabuleux (Fabriano / SPS Augustinus xx – Absatz), and this cross produced the Champion Hanoverian Foal 2005. Future Perfect is a dazzler – tons of presence, swinging, elastic gaits, outstanding type, and a conformation – SOLD to USA as a sport and breeding prospect.
In 2006, Ester delivered a tall, correct and feminine filly by the exciting young Autocrat (Aalborg / SPS Matcho AA).  After Hours remained here until 2012, producing 3 great babies for SunnyDays.
In 2008 Esther delivered a  graceful filly by the wonderful sire Royal Prince (Rohdiamont / Prince Thatch xx), who was SOLD to a dream home in Quebec.
In 2010 Ester delivered a blingy acrobatic, chestnut filly by Wolkenglanz. Wred Alert shows the influence of the Bolero / Akzent on Wolkenglanz’s bottom line, and the blood of Weltmeyer on top. As a 3 year old, Allie blossomed undersaddle and was SOLD to a Grand Prix rider in California.
In  2012, Ester delivered her final foal,  a typey colt by the Rubinstein / Donnerhall son Rubignon.. “Rocketman”, a charming, liver-chestnut teddy bear, Sold to a talented 15 year old Canadian rider. Ester is now retired, as the “grand-dam” at SunnyDays. 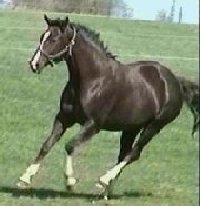 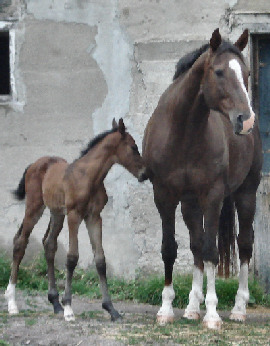