This elegant blonde is our farm’s “Lady Di”. A long-stemmed beauty, with a modern and harmonious appearance, she earned an overall “8” at her VhW inspection, as well as two “1A” prizes by three years of age. Having delivered an impressive performance test, including 2 “8s” in rideability, Di earned her States Premium Approved designation in Germany in August 2005. In August 2006 Di earned another “1A” Prize at the Guelph Inspection Site, and with the birth of her 2006 colt, completed all requirements for SPS Status.
Di’s sire Don Bosco is a producer of very modern sporthorses, including the Champion of the 2000 Licencing, Don Crusador, who is making a name for himself as a consistent producer of type and beauty. Don Bosco’s bloodlines are terrific for sporthorse breeding — Donnerhall on top, with Ramiro / Pik Bube on the damline. What could be better for producing athletes with grace, presence, stamina and rideability!
Ditana’s dam is States Premium mare Prix D’Amerique by Prince Orac xx whose blood is a good foil to the traditional Hanoverian Donnerhall / Ramiro lines from Don Bosco. SPS Prix D’Amerique is from an SPS Shogun xx mother. This refining influence allows us a wide choice of suitable matches among either the North American or German breeding populations.
In April 2006 Ditana delivered a dark brown colt by the beautiful black 2004 Performance Test Winner in Adelheidsdorf, Rascalino who subsequently sold to USA as a stallion prospect.
In 2007 Ditana gave us Holeandra, by the star of the 2005 Hanoverian approvals and Performance Test Champion Hotline from Hofrat / De Niro / Wendepunkt / Busoni xx. This filly (sold in-utero) is outstanding for her beauty, type and elegance, and was ranked 8th in the USA for FEI Four-Year Olds, and later competed successfully through PSG / I1.
In 2008 the first Fidertanz foal was born. Lightfooted, powerful, feminine, Free To Be has always turned heads, and was chosen for the Final Ring at her German Verband Inspection / Foal Show, with much praise for her presence, conformation, hind leg angles and use of her joints. The 2009 Fidertanz – regal, loveable Fuerst Gemini was selected Champion Hanoverian Foal 2009 by Dr Ludwig Christmann and Fritz Floto, and designated a Dressage Stallion Prospect.
In 2010, Ditana gave us another beautiful filly by Hotline, and in 2011, – Q’arnivale, by Quaterback – a golden boy who has gone to a Canadian dressage home.
In 2012 the exquisite Wolkentanz II filly Wavin’ Flag was born, and SOLD to Florida.
Sadly, Ditana’s 2014 Floriscount foal was born prematurely. We will try again.
I am delighted with the birth of a Glock’s Romanov foal from SPS Ditana, on May 17, 2016. Royal Silks was everything we hoped for, and sold to Quebec as a prospect for sport and breeding. He has moved through the FEI Young Horse classes with success, and is already starting PSG.
In May 2017, Ditana gave us a beautiful colt “Foreign Affairs” by the exciting For Romance, who was sold in utero to California.
UPDATE: At the 2017 Hannoverian Verband Inspection Tour, Foreign Affairs was selected as Champion Dressage Foal at the Parkwood site. He was also selected as Champion Hunter Prospect, at that same venue. At the close of the Canadian Tour, Dr Ludwig Christmann included Foreign Affairs in the “Top Ten” list of Hanoverian Foals for 2017 — and he was also awarded the Albert Kley Memorial award for 2017 Canadian Champion Dressage Foal. Whew!
I’m delighted to announce that Ditana delivered a beautiful filly “Modern Art” by the gorgeous “Morricone” by Millenium / Rubin-Royal / De Niro, in May 2018. Modern Art sold to an accomplished FEI-level rider in Ontario — great match.
In 2021, Ditana gave us another beautiful colt by For Romance – a repeat of the recipe that produced the Albert Kley National Champion Dressage Foal of 2017. Force Majeure, aka “Fandango” sold immediately to a repeat buyer from South Carolina who says he is as smart and kind as he is beautiful.

For 2023 we will offer what may be Ditana’s last foal, by Olympic Sanceo, pictured at right, due late April. Maybe her masterpiece?? (Sadly, Ditana aborted her Sanceo filly in December 2022) 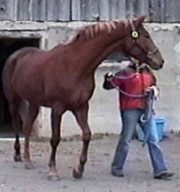 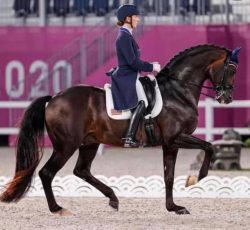