Such a beautiful colt from Ditana! And he is the most charming and friendly chap. Same colour as mom, with the exquisite head and neck that Champion Stallion For Romance seems to pass on consistently.
This striking colt was spoken for in-utero, and spent 3 years of his life in California, before I recently bought him back.
In 2017 Foreign Affairs attended the Western Ontario Hanoverian Inspection and Foal Show on September 3rd, and was selected 2017 Champion Dressage Foal by Verband judges Dr Ludwig Christmann, Ferdinand Haupt, and AHS guest Sandy Hunt, from a field of 17. Furthermore, a separate Hunter judge, Grace Wanyura, using different criteria, selected him as “Champion Hunter Suitability Foal“.
After the 2017 Verband tour ended, Foreign Affairs found himself not only a recipient of the Canadian Top Ten Foal Award but actually the Albert Kley Memorial 2017 Canadian Champion Dressage Foal from the Canadian Tour. Well done, Frankie!
I’ve added a couple more recent photos, showing Frankie recently started undersaddle. He is a willing, kind horse, easy to handle, and very athletic, with enough power and grace for the upper levels. A star in the making.
Videos are of Frankie at days old, a young 3-year-old free jumping and training videos from Spring 2021 and September 2021. Foreign Affairs is doing well with a capable, loving rider in USA. 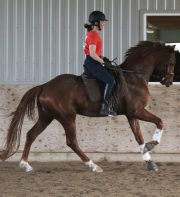 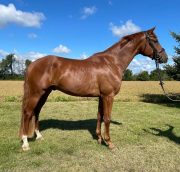