Shakira is by the Leatherdale’s Reserve Licensing Champion Sir Savoy (Sandro Hit / Lanthan) who passed away too young. And she is from the illustrious Hanoverian dam line of Noria – Heinrich Klausing, which has produced such stallions as His Highness, Scolari, Barclay, Rhodes Scholar, Dramatic, Prince Rousseau, Rose Rock, etc.

In 2009 Shakira received her 1A prize, and passed a successful MPT (8’s in Trot and Rideability), achieving States Premium status. She is the 6th consecutive SPS in her damline – and in 2014 her daughter Daira, by Dancier, became the 7th consecutive Premium mare, and earned a place at the 2014 Herwart v d Decken Schau. Close-up we find Dam-sire the world famous, Florestan I, the sire of no less than 90 licensed sons incl. Fidermark, Florencio, French Kiss, Florecso, Florestano, Furst Heinrich, Faveur, Festival Westfalia etc. Shakira’s dam, SPS Florida (by Florestan) is 2 X “1A”, and her grandmother SPS Wynona (by Weltmeyer) was 4 x “1A” and Klassensieger at Berglage in 1991. Shakira’s great-grandmother SPS Grace Kelly (by Grenadier) was Champion of the 1989 Louis-Wiegel Shau and multi-times Champion at Ratje Neibuhr and other venues. SPS mares by Arsenic (SPS Arlette) and Diplomat (SPS Diva) round out the pedigree.

Shakira is a gentle girl, with a soft eye and an animated trot. She has produced one colt by the stallion Destano (Altpremiumhengst 2011, based on the quality of his 1st foal crop, which included the 2011 German Champion Foal). This colt was purchased as a stallion prospect. Shakira has just delivered another  Destano (Olympic Desperados / Brentano II) baby. The filly Delilah is cut from the same cloth as her brother, and is SOLD to Michegan.

Shakira is pictured here with her “just born” Destano filly Delilah, and her 2 Dancier daughters from 2010 and 2011. The sire of Shakira’s coming 2016 foal, For Romance is pictured below. Video of Shakira was taken on Shakira’s first day at the farm.

In May 2016, Shakira delivered a For Romance (Fuerst Romancier / Sir Donnerhall / Don Schufro) foal of exceptional grace and beauty. First Light was purchased early on by Melanie from Quebec – her “dream foal” with great promise for breeding and competition. For 2017, Shakira has been bred to the exciting stallion “Finest”, a black beauty, SPT winner, by Fuerstenball / Wie Weltmeyer / Prince Thatch xx.

As part of my downsizing, I have SOLD this very sweet mare to a Kentucky home, her “forever home” I hope, where her owner will value her and produce many more exceptional foals for the Hanoverian breed. I will miss her sorely. 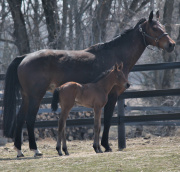 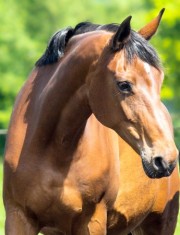 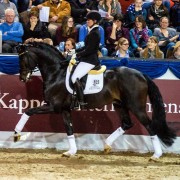