A very handsome colt, and so friendly and brave from the get-go. I believe he is very stamped by his sire, the famous Blue Hors / Glock’s Romanov, by Rohdiamont / Grundstein. Romanov is impeccably bred, with six Licensed full bothers by his mother Rumirell. Furthermore, he has had an illustrious career: He was Reserve Champion of the Oldenburg Approval in 2002. In 2004 he was the best dressage stallion at the Danish Herning Approval.  In 2005 – Champion of the dressage 5-year-olds in Denmark and in 2008 VTV sport stallion of the year. Ridden by Sune Hansen (DEN), he placed in Grand Prix tests, won the Medien Cup in Hamburg in 2010, came second in the Grand Prix Special in Verden, won the Grand Prix in Copenhagen and was on the Danish team at the European Championships in 2011. Under GLOCK rider Edward Gal he found a new winning formula and in 2012 alone earned five top three placings in ‘s-Hertogenbosch (CDI4*), Rotterdam (CDI3*) and Odense (CDI-W). GLOCK’s Romanov has also played a key role in the incredible success of the Danish warmblood, presented excellent foals and boasts approved sons such as Blue Hors Rosoff, twice World Championship finalist in the young horses and premium stallion Skovens Rafael, Tailormade Red Rebel Blue, plus over 196 registered broodmares.
Silky’s dam, SPS Ditana, also comes from established successful bloodlines, with Donnerhall / Ramiro / Pik Bube on top and the TB refinement of Prince Orac xx and Shogun xx on the bottom.
This colt has the genetics for competition success, and a wonderful confident nature. He is such a handsome graceful fellow, with movement to spare. SOLD to a professional in Quebec.. Pictures from 2 days to almost 4 months old, and videos at 4 days, almost 4 weeks, and almost 4 months old.This young superstar blossoms daily. Final video shows Rossi’s first chance to play in water, at 4 years old. 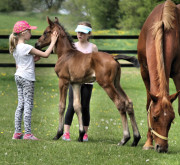 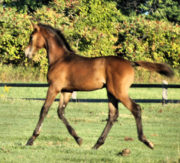 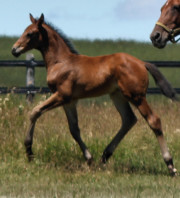 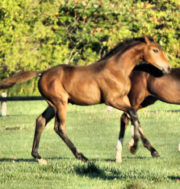