HoneyBee is a charming, long-lined filly, with wonderful type, and 3 good gaits, who will make an excellent dressage partner or – with her stellar Hanoverian bloodlines – a first class broodmare.
She is by the licensing Champion Hotline (Hofrat / DeNiro) who won his SPT in 2006 scoring a “10” for rideability, and 9s for movement. His offspring, have impressed riders and judges alike with their power and grace.
HoneyBee comes from an excellent dam-line. SPS Ditana is by the very good Donnerhall son Don Bosco, out of an SPS Prince Orac xx / Shogun xx dam, who has produced a half dozen SPS daughters and mare-show winners. Damsire Prince Orac xx is the sire of Potomac, ridden to victory recently in the Munich World Dressage Masters Grand Prix Special (with 75.542 score) – – a year after he represented Germany at the 2009 European Championships.
HoneyBee, pictured here as a suckling and as a 2-year old, has been SOLD to Brent and Linda in Ontario, to enter their breeding program. 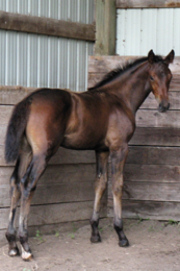