Another delightful scamp from our Contessa – a dynamic cross between her and the popular sire For Romance, by Fuerst Romancier (Fuerst Heinrich) from a Sir Donnerhall / Don Schufro dam. The epitome of lightness, For Romance stood out brilliantly in the strong lot of stallions at the 2011 Oldenburg Verband licensing where he was selected “Champion”; and, as expected, he passed his 30-day test in Schlieckau with super scores, receiving 9.25 for his trot and rideability, a 9.0 for his canter and an 8.88 for character. At 7, he is already excelling at upper-level movements, still retaining the elasticity of his youth. The video below shows him in February 2016.

We named this brilliant bay with white points “Formula One”, because he is a compact and super sporty model with a great engine, who will make a lot of noise in his world. Like his 1/2 siblings by Sir Donnerhall, Romanov and Sezuan, this lad loves to move, and does so very well. Leaps, spins, tempi-changes and extensions — all natural to him.

These pictures show our Formula one (aka “Indy”) from 4 days to 3 months old. The first video after the For Romance clip, shows Formula One at 2 days; the next shows him enjoying the outdoors with his pasture-mates. Top prospect for sport or breeding – SOLD as a stallion prospect to Ryan in CA 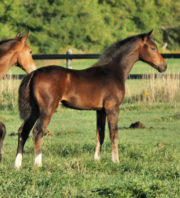 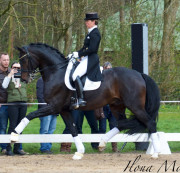