Our beloved Contessa officially entered the Broodmare band in 2006! She is a graceful, athletic, and confident mare, and very interestingly bred.
Her sire, Contendro, is a very much sought-after stallion, consistently producing typey foals with correct conformation and refinement. The expressive and brilliant dark brown Contender son was the favorite of his approvals and winner of his stallion test in Adelheidsdorf in 2000 with a total of 144.72 – Jumping 147.29 and Dressage 131.09. His movement is extremely elastic with wonderful self-carriage in the trot and canter. From Contendro’s first foal crop, twelve sons were selected for the keuring, and six of them licensed. Since then he has continued to produce a disproportionate number of licensed sons, jumping-competition winners, Verden auction foals and highly-regarded riding horses.
Contendro’s bloodlines are wonderful, with excellence in both dressage and jumping proven again and again. He is greatly influenced by Ramzes through the famous Ramiro (whom many breeders believe cannot appear often enough in a horse’s pedigree!). His sire Contender’s mother is by Ramiro. Contendro’s mother Bravo is by the Ramiro-son Reichsgraf. Bravo’s mother Ofarim is by Rasputin, by Ramiro with Tin Rod xx and Ute by Ramzes.
Contessa’s dam is SPS Ester, who consistently produces wonderful foals for Sunny Days Hanoverians.
Breeding History: Contessa’s first foal, Sonnenschein by Sir Donnerhall, was selected Top Filly at her large 2007 German Verband Inspection / Foal Show. The 2008 Romanov filly, Royal Gala by Blue Hors Romanov, was selected Top Filly and overall Champion Foal 2008. Next came the 2010 Sir Donnerhall colt Sonnenfeld – Champion Dressage Foal in 2010.
In May 2011 came the smashing liver-chestnut Sir Donnerhall colt, Sesame Street who was home-branded, and of the same quality. Sold to an ecstatic dressage enthusiast in Ontario.
The 2012 Sir Donnerhall colt “Spider-Man” was selected Champion Dressage Foal at the 2012 Parkwood inspection site from a crop of 23 lovelies! The last Sir Donnerhall, home-branded, was the sprite “Sugar Baby“- of wonderful type and now SOLD.
For late May 2014 Contessa was confirmed in foal to “wonder-horse” Sezuan by Blue Hors Zack / Don Schufro — and SOLD in-utero to a professional near Seattle WA.
The videoclip below is of Contessa at 3 years – 9th time with a rider on her back.
UPDATE: Contessa presented us with a beautiful, refined colt “Formula One” by the magical stallion “For Romance” (Furst Romancier / Sir Donnerhall / Don Schufro), on May 27, 2016, who has been sold to California as a Sport and Breeding prospect. For Romance video is below.
Sadly, we were not able to have a foal from Contessa in 2017, but we are happily anticipating a bouncing baby from her in June of 2018. Sire, TBC, as she was bred with a “cocktail” of 3 types of frozen semen – from Sir Donnerhall, Zonik and Donkey Boy. See more on these stallions on the Sires page.

UPDATE – Contessa’s June 2018 foal, DNA tested as a son of Zonik, was awarded the International Hanoverian Verband “Gold Medal Foal” Award, and also made the “Top Ten in Canada, 2018” Award from the Canadian Hanoverian Society. We were unable to breed her successfully in 2018, but hope to succeed in 2019, for a 2020 foal.

UPDATE – Contessa delivered the captivating colt “Finn McCool” by Grand Prix stallion Franziskus in April 2020, and is confirmed in foal to the dynamic sire Q-Sieben for May 2021. 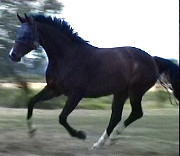 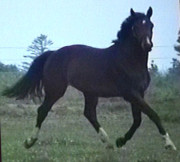 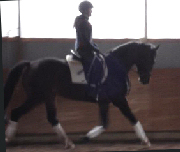 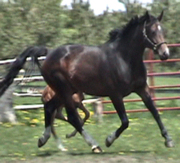 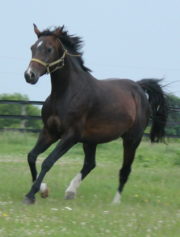